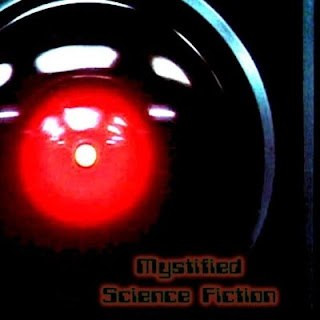 Mystified's Science fiction starts of with Thomas Park’s trademark drones backed with a punctual beat; however Cold Radiance holds the radiating drone as a constant with the repeated beat moving from background to foreground. Park immediately holds true to form demonstrating the twin skills of minimal usage of elements and title/track harmony. The beat vanishes leaving Haunted Drone combine a haunted drone and atmospheric treble atmospheric shimmer. The drone moves in depth across the track to good effect, keeping the listeners attention fixed. Deep Freq takes the level right down to a rumble, that teeters on the edge of distortion, combined with the shifts in low frequency, the levels of crackle are edged slightly creating a dance between the two. Ten and Two takes over the distortion this time moving alongside a sharp frequency, distorted crackling is now taking prominence of Science Fiction the speed of the crackling changes alongside that of the sharp frequency; this shifts the levels of intensity well. The elements combined shift to such extreme that Mystified enters the area of power electronics for a brief instant. Moscow follows suite with an intensified humming motorized drone with the beat re-entering.

The beat remains sharp allowing the drones to mutate, the basic beat is dorky, timeless and funny, the sounds remind one how over motorized Moscow is vehicle wise; there are also nods to Kraftwerk’s Autobahn made here . Carnival Drone combines a carnivalesqe drone with backing sounds hidden well to an almost subliminal frequency, this shows a difference with a slightly more prominent ghostly darkness than other releases. Science Fiction hits unusually quickly with three elements that immediately make the mind think of UFO/extra terrestrial life forms, whilst continuing to revel in darkness. Spatial awareness is also shown in the timeframe to good effect, the sounds also sound like they are trying to communicate. Polar Midnight continues with scope of space but with a deep humming drone that remains in a limbo that is neither in the forefront or background. Happening gives a return of static with a shift in sound given by an airy wind like sound. Sustain offers combines melodic organ like sounds and dark channeled atmospheres to a wind down finale and simply vanishes.

Science Fiction is another well thought out album by Mystified with a sci-fi bent, sending the brain into overdrive, Blade Runner should have yet another directors cut, but this time with this as the soundtrack.