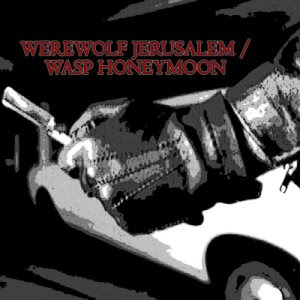 The release only lasts just over the twenty five minute mark, but the trio really pack in a lot of textural shifts & brutal sonic dips & riser’s through-out the four tracks on offer here. It all kicks in nice ‘n’ nasty with the just over two minutes of ‘Part 1’ that's all about nice searing rumbling's meeting juddering static tones which is all unlined by this grim sort of bassy drone which gives a nice oppressive air giving & brings to mind the feel of a victim hiding from his Killer in a wardrobe or under a bed.

‘Part2’ hacks straight into to you with a shrill teeth-grating jitter like you’ve just being stab very hard in the head a few times. Then we drop into a few minutes of great ominous & nightmarish clouds of tolling ambience that are overhang by deep static crunch; but pretty soon your slammed back up into ‘wall’ territory with brutal velocity. Yet the track still keeps it’s grim ambient & rumbling under base- the rest of the track nicely shifts texturally gears from one seared & dammed ‘wall’ after another in a nice often jolting & brutal execrating manner.

‘Part 3’ is the longest track here at just under the fifteen minute mark & it starts out with a nice thick & punishing wall of dark sound. The 'wall' sort of sounds like semi slowed mass of voodoo drums that are lined with static builds 'n' grinds, as the track progresses the wall of sound just gets thicker & thicker, more airless & oppressive in it’s feeling like it's pressing out all the light & air from your listening space. This track feels like the killer is feverishly working on slice, peeling & dismembering your desiccated corpse. As the track grinds & drills on the trio nicely shift & morph textural roars, groans & drags with-in the thick wall of sound, through there are no great sudden shifts or rapid stabs of sound like the second track- this track is more about slowly craving & gutting of all hope(and your organs) away!.

The CDR comes in a very nice thick see-through plastic case that has on the outside a black gloved hand holding a straight razor & on the inside a picture of the stretched out & blood soaked murder victim- both pictures are done in grainy and slightly off focus black & white which really fits the albums nasty, blacked & murderous sonic tone. I can safely this is one of best examples of brutal & sleazy- yet often darkly atmospheric Giallo influenced HNW I’ve come across & it comes in such a classy/ fitting package too. For more info, to hear samples & buy direct drop in here. 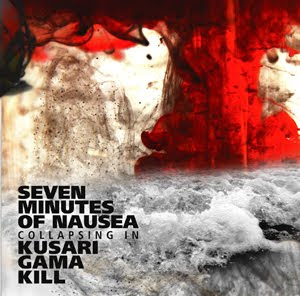 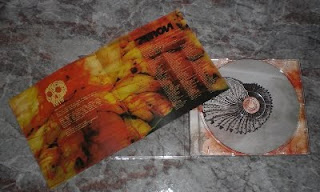